The Winter Whitefish Carnival officially began on Saturday with the crowning of the first round of royalty, the Duchess of Lark and the Prime Minister, at the Merry Maker event.

Joel Pemberton was born and raised in the small island town of Anacortes, Washington. Growing up in a small town, her dream was to have a small community business to provide goods and services through long term relationships. He left Anacortes to attend college in British Columbia where he met his wife, Chantel. After graduation, they married and settled in Northwest Washington, and eventually on Fidalgo Island. While living in the San Juan Islands is truly amazing, they have always been drawn to the mountains. When they had the opportunity to move Joel’s practice as a financial advisor with Edward Jones to Whitefish 10 years ago, they jumped at the chance. Their three children were able to grow up in Big Mountain and Glacier National Park, and they all agree that the move was the best thing they’ve ever done for the family.

Upon arriving in Whitefish, Pemberton immediately became involved with the Rotary Club of Whitefish. He served as chair of the local project committee for three years and led the Bakke Nature Reserve project, along with the town of Whitefish, the Whitefish Community Foundation, and other great Rotarians. Pemberton served as club president in 2018-19 and chairman of the RCW Charity Fund board in 2019-2021. Pemberton has also previously served on the board of directors of Flathead Industries. Joel and Chantel are regular volunteers at Whitefish Chamber of Commerce and Whitefish Young Life events, serve in their church, and Pemberton is chair of the board of directors of Absolute Ministries, a new program that helps people break the cycle of rehabilitation.

Pemberton says he is passionate about serving his clients at Edward Jones and making an impact in his community. He is also a “ski junkie” – he enjoys both skiing and snowboarding as well as cross country skiing. In the ‘off season’ (every season that is not ski season), he enjoys mountain biking, paddleboarding, hiking, golfing and camping with his family and friends as much as possible.

She enjoys spending time with her two brothers, Malcolm and Owen Goble, who also still reside here in Flathead Valley. After graduating from Whitefish High School in 1999, Clare attended Montana State University at Bozeman, where she received a Bachelor of Education degree. After obtaining his degree and a short-term teaching job, Goble made the decision to pursue his career in the restaurant industry; a decision made only because she was not yet ready to give up the ski bum lifestyle.

Goble paid his way to Bozeman by serving tables and launching pizzas at the MacKenzie River Pizza Company. This work evolved into several management roles and ultimately to her current position at Glacier Restaurant Group Headquarters as Director of Training Development.

An active member of the community, Goble sits on the Board of Directors of the Whitefish Chamber of Commerce and is also the Regional Manager of several restaurants in downtown Whitefish.

The Whitefish Winter Carnival has been near and dear to the Goble family for decades. Year after year, the family has welcomed friends to their Second Street home for an open house. A tradition that will only take on more meaning now that Claire has been honored with the title of Duchess of Lark.

The Whitefish Winter Carnival continues through February 5. Next up is the coronation of King Ullr LX and the Snow Queen at the O’Shaughnessy Center in downtown Whitefish on January 15, followed by the carnival disco party the same evening. For more information, visit whitefishwintercarnival.com. 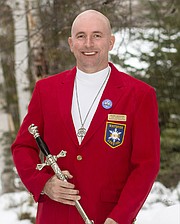