“This season has been like a four lap race and by the third lap we were in first place and you’re really, really hoping but you still have to finish that last race,” said Siloam Springs NICA coach Glen Carte. . “We put in a lot of volunteer hours, the kids rode really, really hard. It was a lot of fun. Winning in a row is not an easy thing to do. Super proud of the kids, super proud.”

At NICA, it’s not just race results that matter. Volunteer hours and participation are included to determine the ranking of teams and individuals. Coddington said the league’s student-athletes have volunteered more than 8,000 hours this year.

“It’s been an amazing year,” Coddington said. “We start training in July, and to finish here at this special place, it’s just quite a progression all year. We’re barely shy of 900 kids in the league statewide. And we have had a lot of new people. and being excited about it. It’s hard to say how much this program invests in youth development. It’s not just about mountain bike races. To say we’ve done 8 673 volunteer hours invested in communities across the state, and that’s just athletes, tells you it’s not just mountain bike racing I couldn’t be prouder of the kids.

“We have our GRIT program, which is Girls Riding Together,” Coddington said. “It’s all about getting more girls to ride bikes. We’re 28% female. I want to get to 41% because that’s what other school sports are.”

Then the prelude time trial in Russellville, followed by the four races in Barling, Hot Springs, Mountain Home and the finale in Fayetteville. Centennial Park hosted the UCI Cyclocross World Championship in January and has hosted other world-class mountain bike and cyclocross events.

“It’s such a special place to race where the World Championship was taking place,” Coddington said. “Athletes can go home and say they raced straight away the same as Tom Pidcock attacked and won the world championship. And there’s something about that in cycling, whatever discipline it’s in. you can ride the same course or the same road or the same trail as one of the pros and you can compare and that makes it special Arkansas is lucky to have all of these things in our state I can’t can’t think of a better venue in the foreseeable future for our final. We almost maxed out parking today. Like if it was us, we might have liked the last five spots.”

Carte said his team is always thrilled to end the year at Centennial Park.

“It’s a really, really cool place to have a race,” he said. “It’s a world-class professional course with plenty of room for all the teams to spread out. And that’s something that I think most parents aged 25 or older would like to have this type of program when ‘they were younger so they could ride on it.”

Coddington expects more growth by 2023. The league had 32 teams this season and just over 300 coaches across the state.

“We’re growing 20% ​​to 30% every year,” Coddington said. “So we’ll probably be close to 1,000 kids next year and maybe 400 coaches. The secret sauce is that it’s youth development on two wheels. If someone comes to a race and sees how how special it is and how great the races are, and that the kids are making friends, and they’re riding their bikes, and they’re having fun, and yes, they’re competing, but they’re also learning life lessons along the way.”

Outreach programs throughout the winter and spring are helping the league grow, Coddington said.

“We work with communities that don’t have a NICA. And we show them how to do it,” Coddington said. “A lot of communities think, ‘I don’t have trails, and I can’t do it.’ I’ll use Conway as an example. When they started, they practiced in a city park and had the biggest team in the state. And they did a good job, and now because of that, they get trails. This is how a NICA team can change the community.”

Coddington would also like to see more in-state ATV racing opportunities for NICA students upon graduation.

“We had 57 seniors in our league this year who are going to continue and hopefully continue mountain biking,” he said. “I wish there were strong collegiate cycling programs in the state. That’s the next step of trying to get some universities to understand that it’s a real sport. And we have talent in the state. And it’s not just talent, but a pipeline of talent, that we could create super strong college programs. If we could get them back to the next stage of their riding careers. Cayden (Parker ) won a bronze medal in a world championship and he is a four-time national champion in Hot Springs. I would like that to happen. 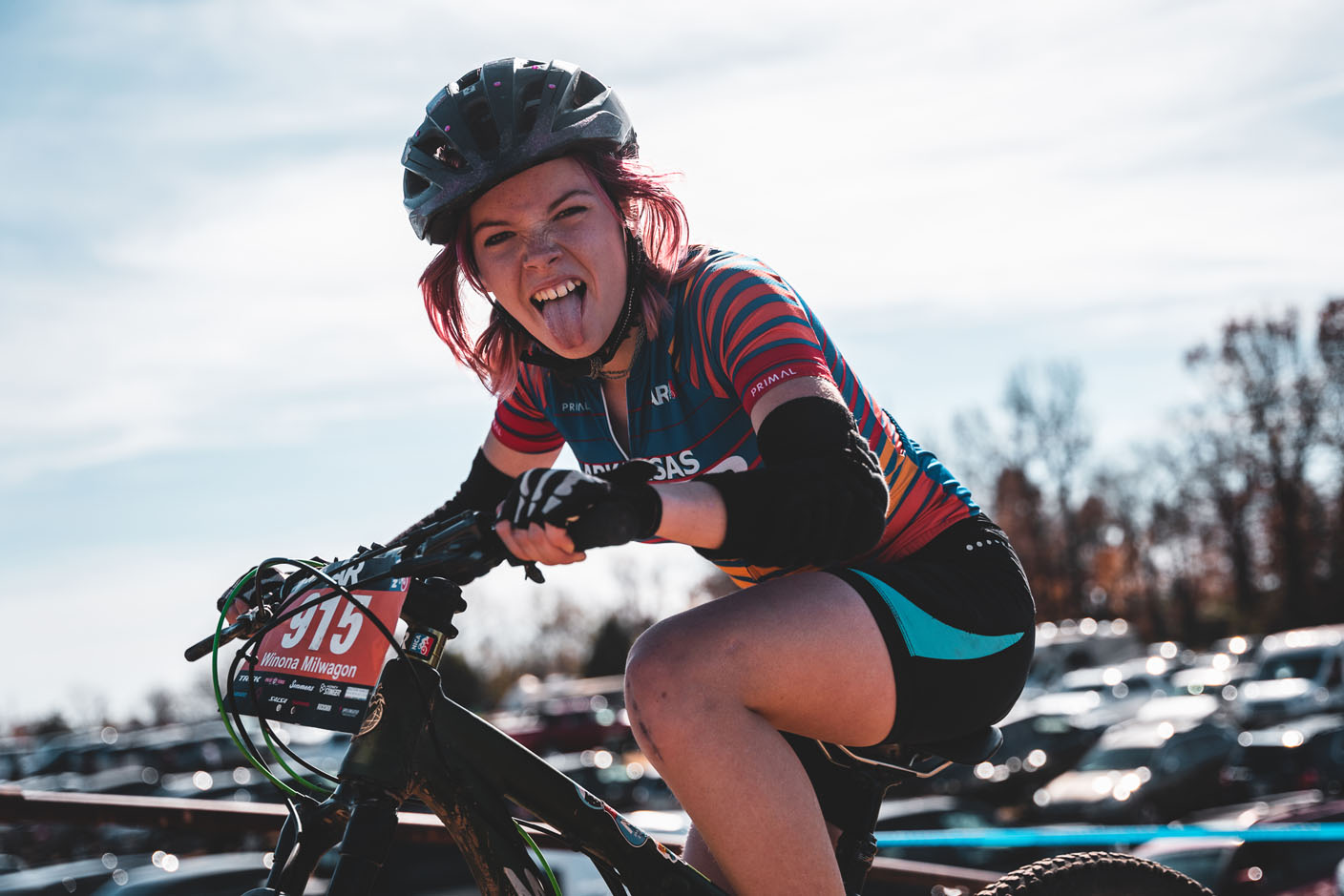 Freshman Girls State Champion Winona Milwagon of Eureka Springs reacts at the top of a climb during the NICA State Championship race Sunday, Nov. 6, 2022 at Centennial Park in Fayetteville. 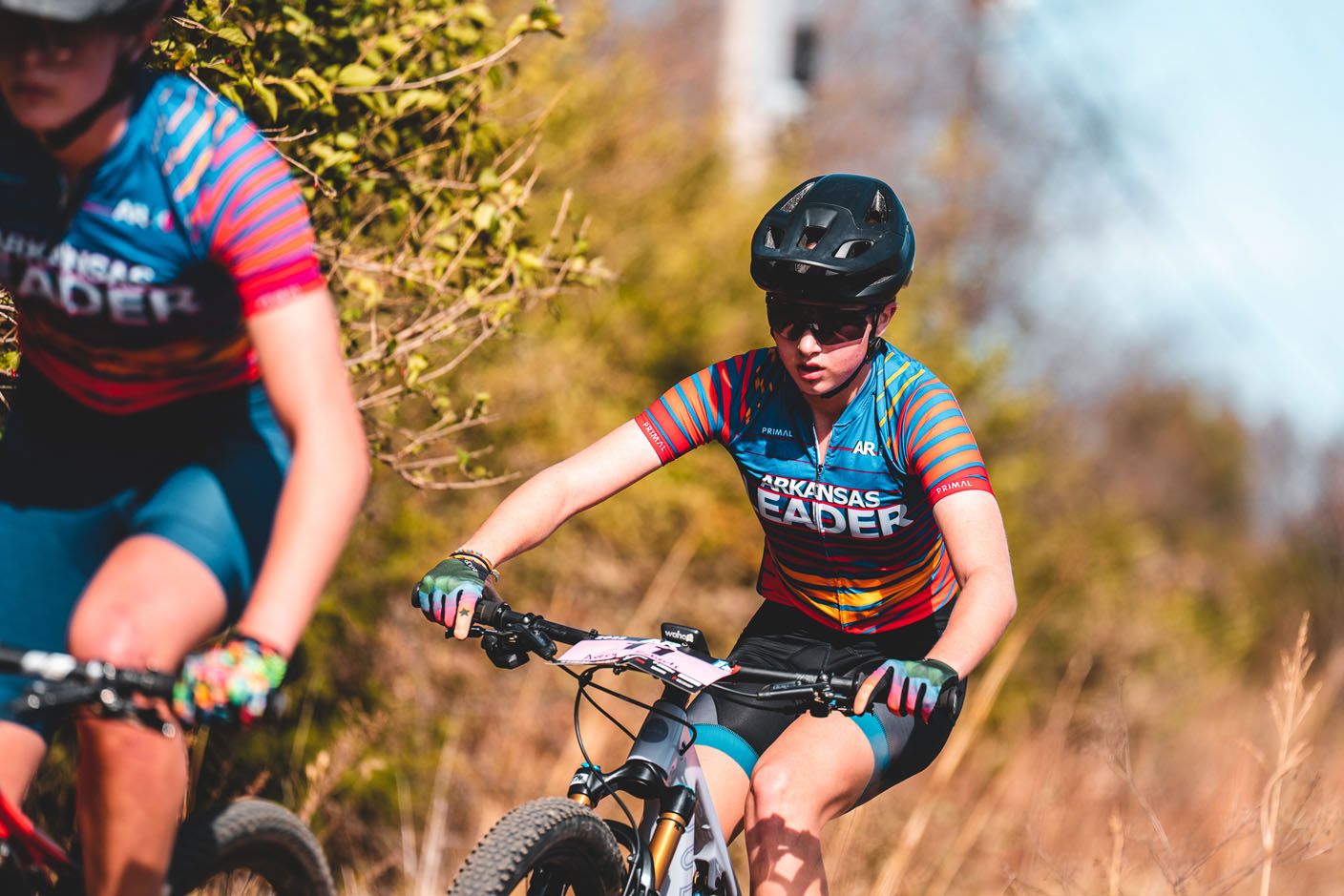