When Ibis released the Exie, there was plenty to get excited about. The carbon fiber frame is handcrafted at Ibis’ new headquarters in Santa Cruz, California. It takes the proven DW-Link suspension design and uses it on a 100mm (120mm) travel frame fork. And the Exie just looks fast.

Sometimes high expectations can lead to a disappointing experience in the woods. For a few months pushing Ibis’ new cross-country racing whip, the exact opposite happened. The Exie is immediately impressive, both light and responsive but also stable. Throughout the testing period, it continued to exceed my expectations of how a cross-country race bike could and should feel. Here’s more on the bike, and exactly how it sets the bar so high.

Ibis designed the Exie to meet the standards of World Cup racing and more aggressive cross-country. It’s lightweight, with a frame under 2,000 grams, and it’s efficient on the pedals. But Ibis also ends up making a very fun bike to ride hard and ride at the limits of XC bikes. The DW-Link suspension design, proven on longer travel trail bikes, adds stability and predictability to the Exie’s 100mm rear wheel travel. The Exie comes with a 120mm fork, although the frame can be run with a 100mm fork for a purer XC feel.

The Exie’s performance is aided by strong geometry. The 67.2-degree head angle is reasonably slack for cross-country. Size-specific seat tube angles, ranging from 73.8 to 75.9 degrees, are intended to keep the rider in a powerful position on the bottom bracket and also help keep weight on the front wheel while riding seated.

There are also all the details you would expect from a high quality handmade frame. Super clean internal cable routing, clearance for 2.4” tires, space for long travel dropper posts and space for two water bottles in the front triangle. The paint, minimal in color with most of the carbon fiber visible through a clear coat, shows off the handwork of the Ibis frame makers and looks great in the sun.

Having ridden longer-travel DW-Link bikes before, I both had high expectations for the Exie and was also curious how the design would translate to a cross-country rig. On larger bikes, the design creates a bottomless feel that is also, somewhat, snappy in the corners instead of wallowing deep in suspension or dampening a trail.

Applied to the Exie, DW-Link has the added benefit of a great blend of efficiency and traction in terrain where XC bikes can sometimes struggle or feel harsh. Pedaling is efficient on smooth trails (and comes with a remote lockout for perfectly buff climbing or sprinting). Push into roots or rocks and the Exie moves enough to keep the tire firmly planted, providing excellent traction when climbing, without rocking or feeling like it was wasting watts. In fact, start really locking on the pedals and you’ll almost feel like the Exie is accelerating over the roots. Whether this is true acceleration or just the lack of expected deceleration, I’m not sure. But the Ibis clearly doesn’t cling to obstacles like many other “efficient” cross-country models do. 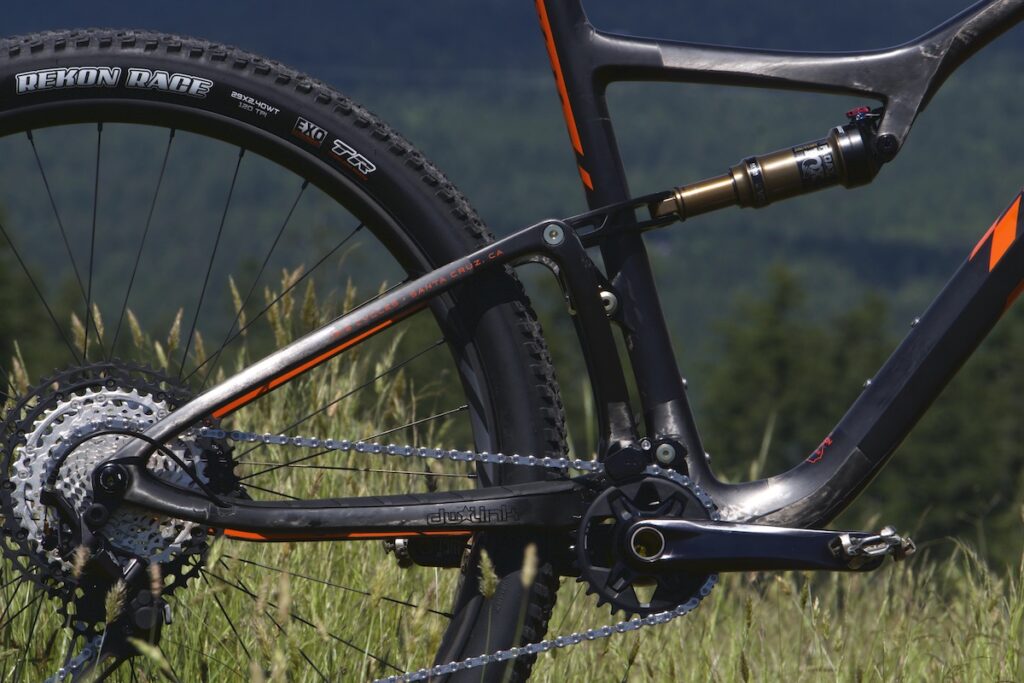 DW-Link design is at the heart of Exie’s performance 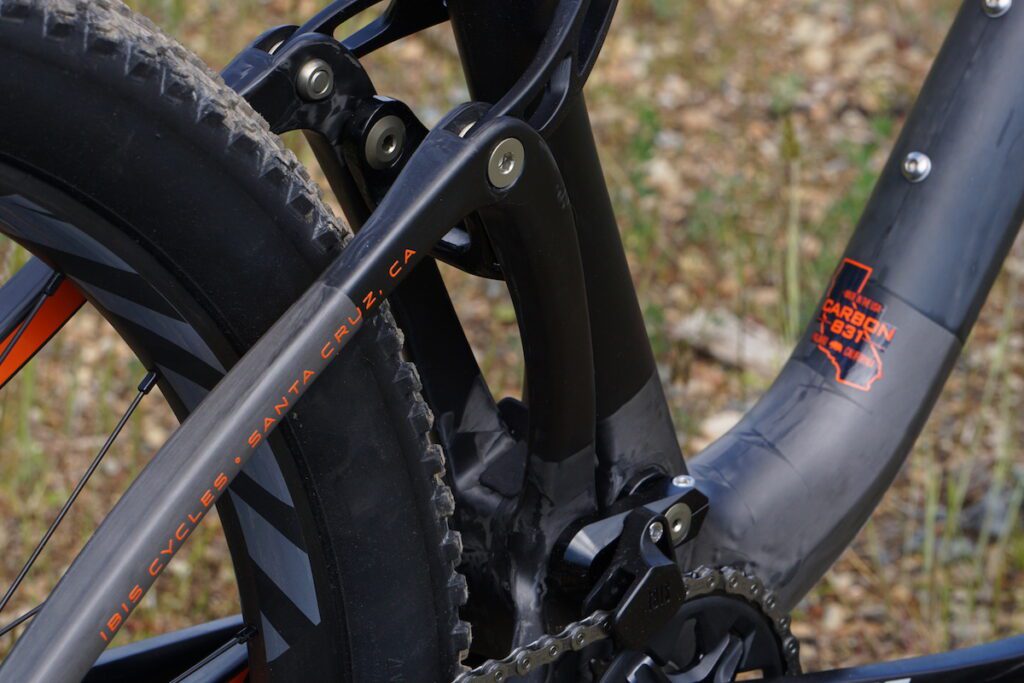 Details, like a one-piece rear triangle, keep flex out of the equation 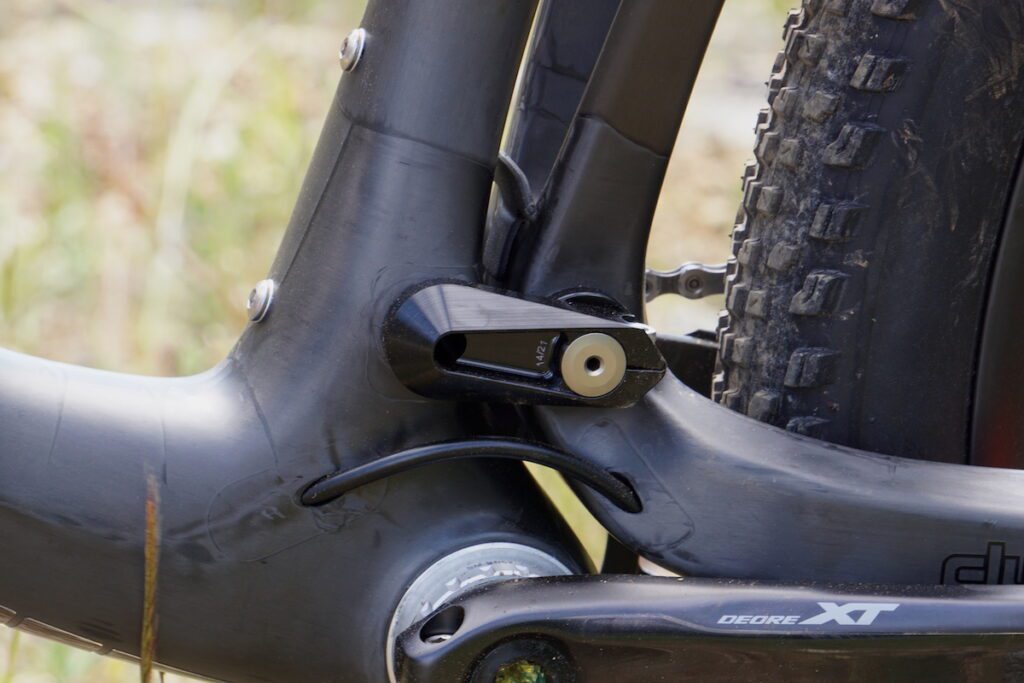 Solid bindings aren’t the lightest, but won’t cause problems after a race

The DW-Link also comes with expected handling features. The Exie has a very supple feel on the descents. So, although there’s still only 100mm of rear travel and a 120mm fork, you can get down tough descents faster than expected without the bike getting under you. A one-piece carbon fiber rear triangle keeps the Exie true and super quick through the corners. Like some of the long-travel Ibises, the Exie is plenty fast and, all the same, quite fun to drive.

There really aren’t many downsides. Dual lockout levers create a busy cockpit, but no busier than any other non-AXS bike (and there’s an AXS build option). The head tube may be slacker than some other XC bikes, but it never felt bulky or sluggish and helped on all the rough features and at high speeds. The brakes are single piston but, with a 180mm front rotor and 160mm rear, they have plenty of stopping power without overwhelming the very fast Rekon Race tires. There really isn’t much bad to say about the Exie’s performance. 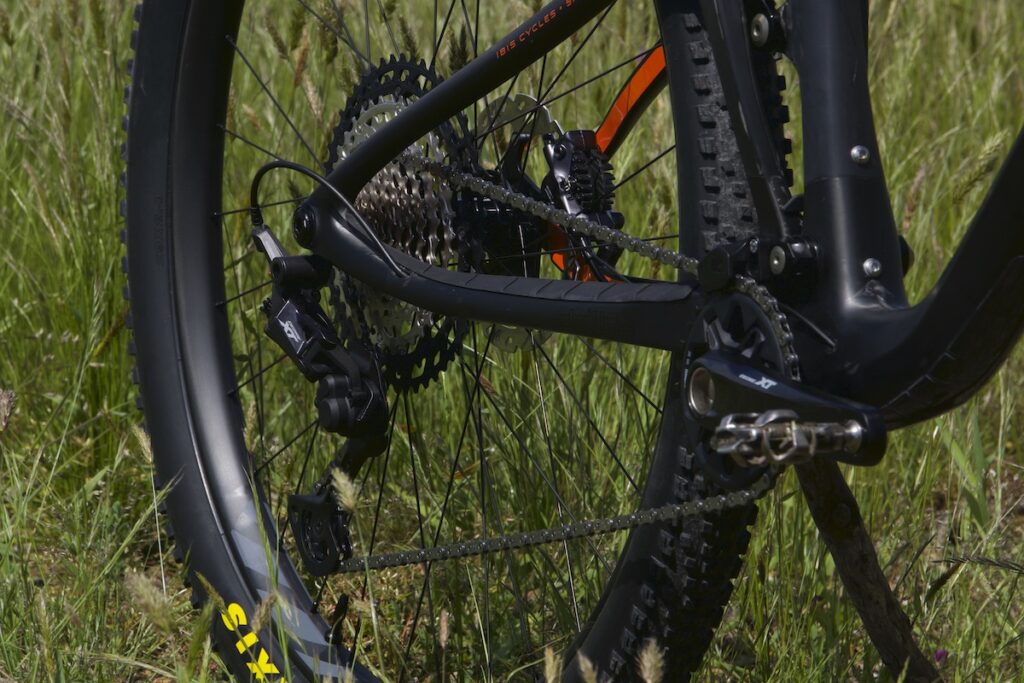 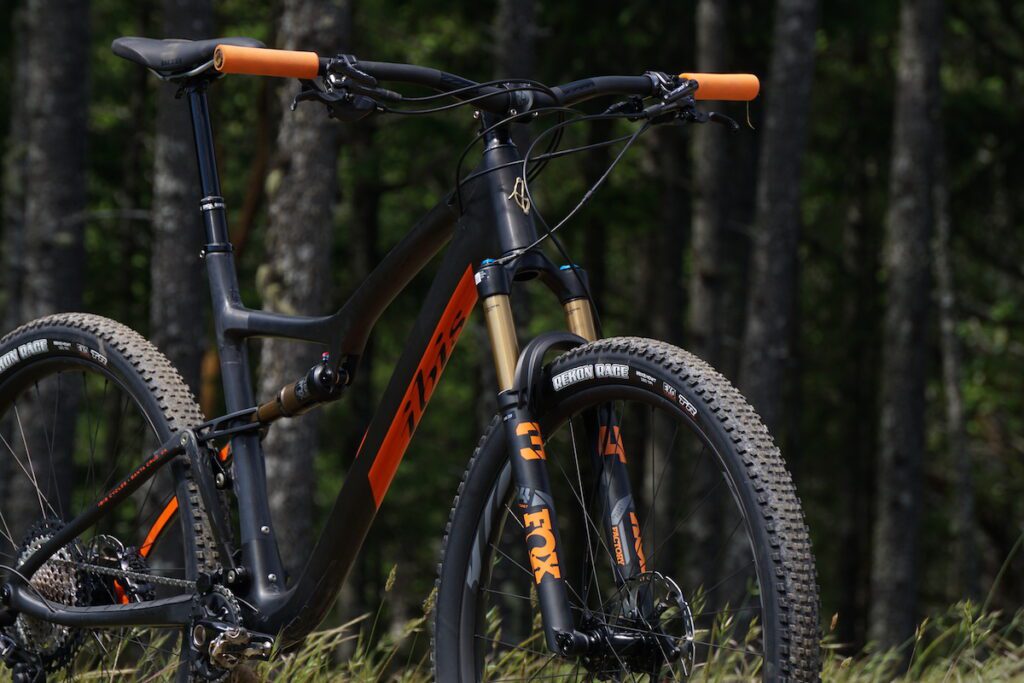 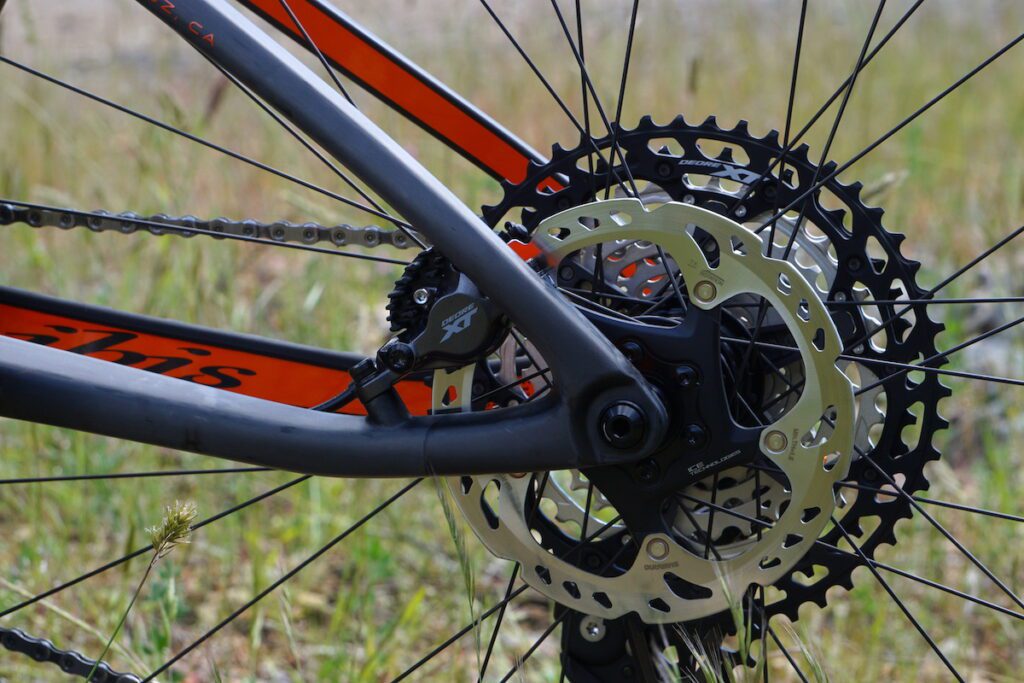 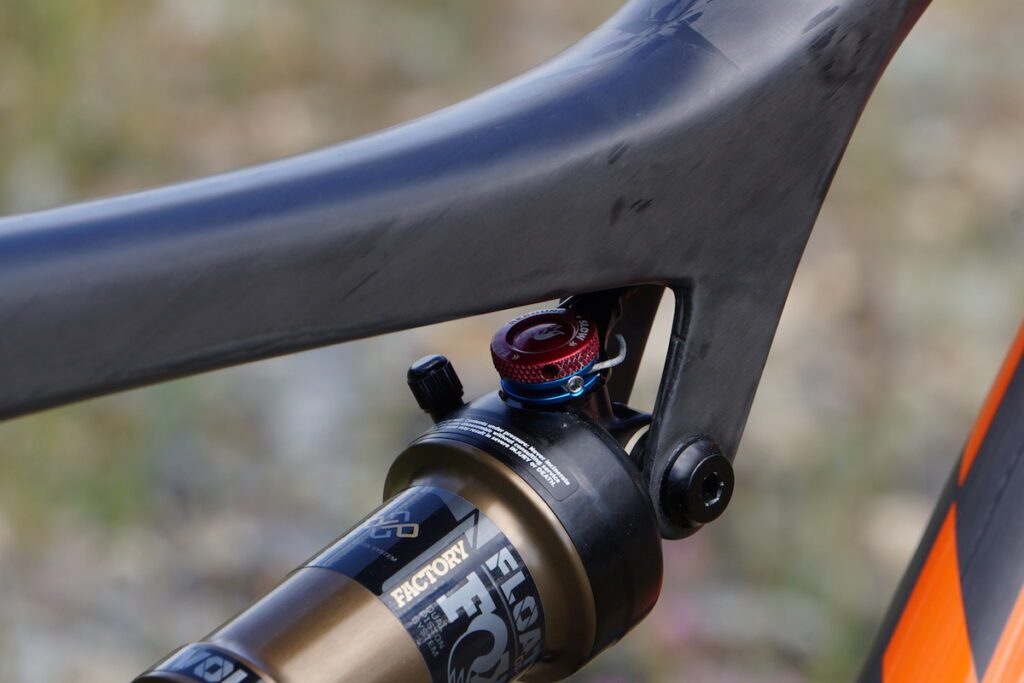 Ibis offers the Exie in three versions and as a frame-only option. Hand-built in the USA comes at a price. The Shimano XT option tested is the cheapest, at $7,999.00. With the (optional) upgrade to Ibis’ S28 carbon fiber wheels, that comes to $8,848.00. Two SRAM versions – a mechanical XO1 and a wireless XX1 AXS – drive the price up even further.

For that price you get a very solid kit of parts. Full Shimano XT drivetrain and dual-piston hydraulic brakes power and stop the Exie. The 120mm-travel Fox Factory 34 Step-Cast fork and a Factory Float DPS are both equipped with remote lockout. Ibis’ S28 wheels are light, fast and fun to wear with the Exie frame. Ibis also supplies its own carbon fiber handlebar, although Industry Nine takes care of supplying the A318 stem (50mm for sizes L and XL). My XL test bike came with a 213mm Bike Yoke Revive dropper post. That’s long enough for a cross-country bike, although the Exie is confident (and fun) enough to use the extra room to move around on the bike.

Again, there’s nothing out of place on the Exie, and everything works just fine. It’s just not cheap. You can get a similar build kit for less, but it won’t come on a hand-built carbon fiber frame. 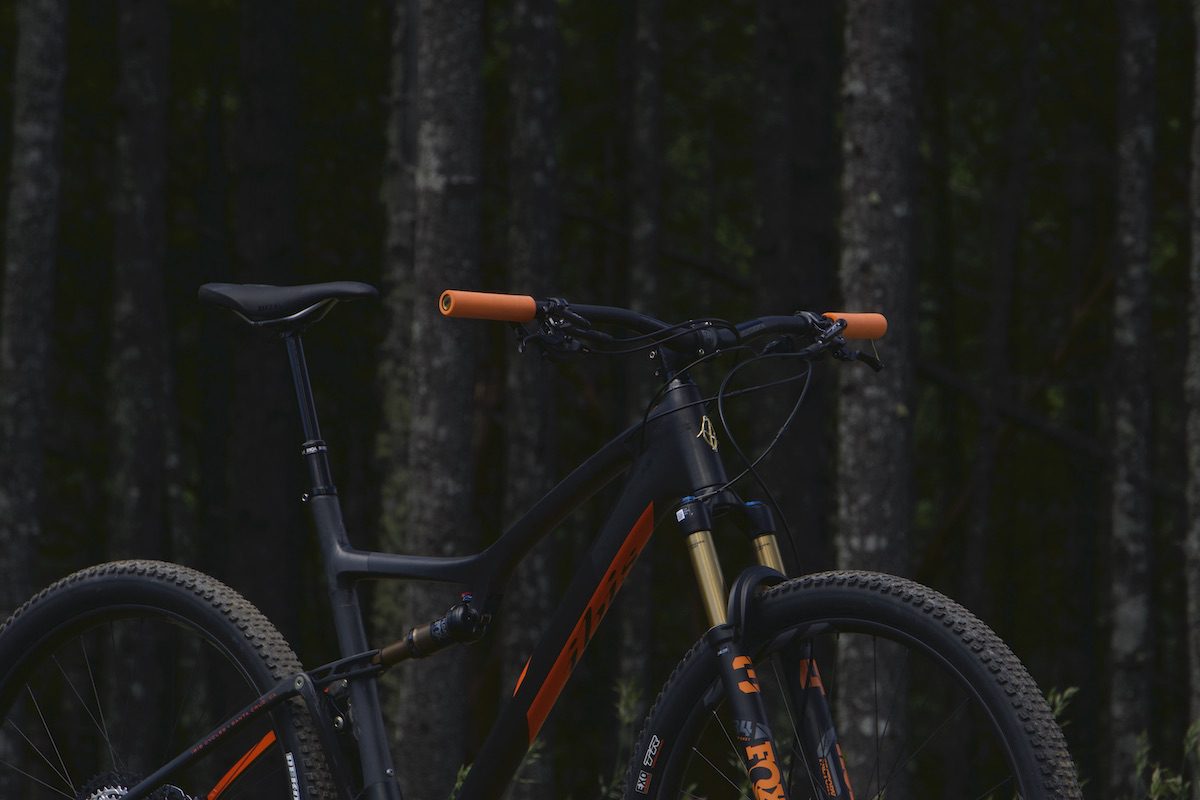 The Exie is what a North American frame from a small premium brand should be: it’s a dream bike. It’s well made, it looks well made and it backs up its looks with impressive performance that’s well balanced between acceleration and fast fun. Really, the only thing to be said against the Exie is that it all comes at a price. At $8,848 ($7,999 without the upgrade to carbon fiber wheels), the XT is Ibis’ base build. Two SRAM builds drive the price up even further from there.

But what making the Exie in-house allows Ibis to achieve with the Exie is impressive, and it’s an investment that pays off on the trails. If you’re going to pay for North American production, you might as well get a great bike out of it. And the Exie is, in every way, a great cross-country bike.