Round three of the Speed ​​Series/Shannons Motorsport Australia Championship was in full swing on Saturday at Sydney Motorsport Park with races for all classes.

Joey Mawson started from pole and beat Aaron Cameron in Saturday night’s floodlight race. Mawson led James Golding and Cameron to the start and Golding attacked early, but a broken steering arm and a cut tire paid for it.

Cameron took on the role of challenger and every attempt to get out of it was successful. Tim Macrow and Nathan Herne fought for third place, with the first being by a car length. Shae Davies finished fifth as he took advantage of contact between Cooper Webster and Blake Purdie at turn 5 on the opening lap.

The day started well for Nathan Herne (Mustang) with a victory in the first race before a disaster in the second, under the floodlights, where he failed to finish. Second was his GRM teammate Owen Kelly, while Brett Holdsworth (Camaro) was third.

Just after the start, the push and shove of Turn 2 saw Lochie Dalton (Mustang) turn around. Shortly after, Tim Brook (Mustang) also had drama there and lost places. The safety car was out when Tim Shaw (Camaro) spun at Turn 1, which disrupted Jett Johnson and Mark Crutcher in their Mustangs.

Kelly won the second race from Grice and Bates. Herne led the race by 2.5 seconds before slowing down due to a broken belt. Dalton finished fourth ahead of Morris, Thornburrow, Burcher, Johnson, Holdsworth and Kyle Gurton (Mustang). The honors in both races went to Ryan Wood and both times he had to beat Tom Sargent after poor starts. In each race, Courtney Prince finished third while Aron Shields and Jason Miller finished fourth and fifth. Brett Boulton and Sam Shahin shared the Morris Finance Pro-Am class victories while Tom Taplin won Class B twice.

The first race was the Jim Richards Endurance Trophy. Sargent led Wood from the start. Lachlan Bloxsom moved up to third while Prince moved from ninth to fourth. The safety car came out when Bloxsom bunked at Turn 3, after which Wood hit and took the lead.

Sargent jumped from second place in race two as Prince jumped to second place. Wood briefly finished third before passing Prince. Wood chased Sargent and on the final lap made the pass as they entered the main straight last time out with Sargent unfortunately hampered by lapped cars. Boulton held off Shahin after a long battle for Pro-Am class honors. The first race was on the wire where John Bowe took victory over George Miedecke on the last lap. From pole position, Bowe (Holden Torana A9X) got ahead of the fast Miedecke (Chev Camaro) before the latter took the lead. Bowe made a better exit from Turn 8 and made the move through Turn 9 and recorded his 103rd TCM win.

Miedecke won the first race of the Trophy ahead of Cameron Tilley and Cameron McConville (Camaro) third. Mark King (Camaro) spun at turn 5 on lap one and was hit by Brad Tilley who had nowhere to go. From behind, Bowe worked his way up to fifth, then slowed due to an oil leak. Hansford fought his way up to fourth and finished ahead of Karanfilovski and Pollicina who came back from 15th to finish sixth. Brothers Drew and Aaron Russell each recorded victories in the half-hour races ahead of Sunday morning’s 300km event where they will share their BMW M3s. The two were second at the start behind Tim Leahey and Beric Lynton (M3) respectively before taking the lead from each. The first of two 50-minute races with a mandatory pit stop went to Chris Perini ahead of second-placed Peter Carr and Peter Paddon, while third place went to Zig Fuhrmeister.

Elliott Schutte was the early leader before Carr passed him. At the pitstop, the latter had to wait another 5 seconds to hand over to Paddon, due to a slightly out of position start and lost the lead to Perini who entered at the same time. The opening race of the first lap was won by Ricky Capo in the Praga R1 when he took the lead with three laps remaining. Second was Neale Muston (Radical SR8) with John-Paul Drake (Wolf F1 Mistral) third.

Stephen Champion (Radical SR3) did not leave the line, but the car was quickly towed away. However, the safety car appeared soon after with Bill Medland (SR3) stuck. Ryan Godfrey (Wolf Tornado) led for three laps before being passed by Muston, Drake and Jason Makris (Tornado). 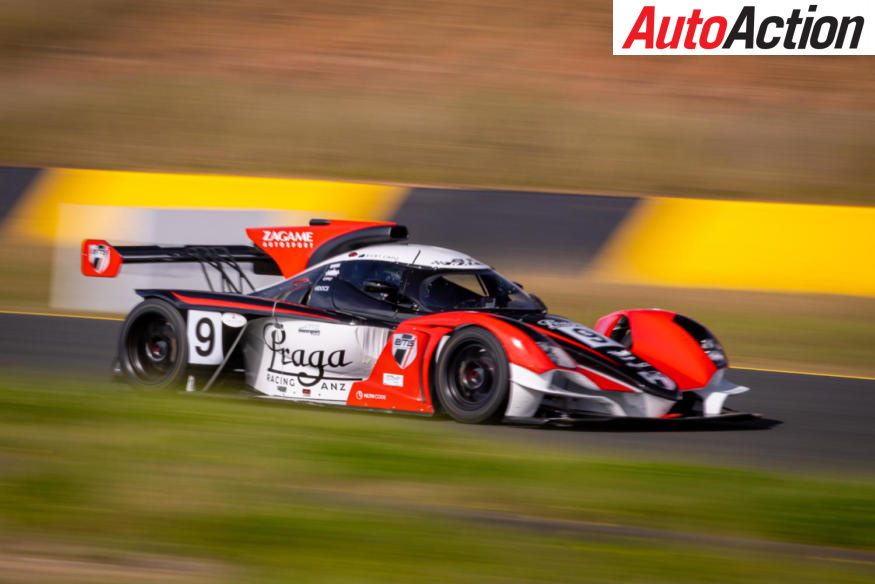 Get the latest updates straight to your inbox