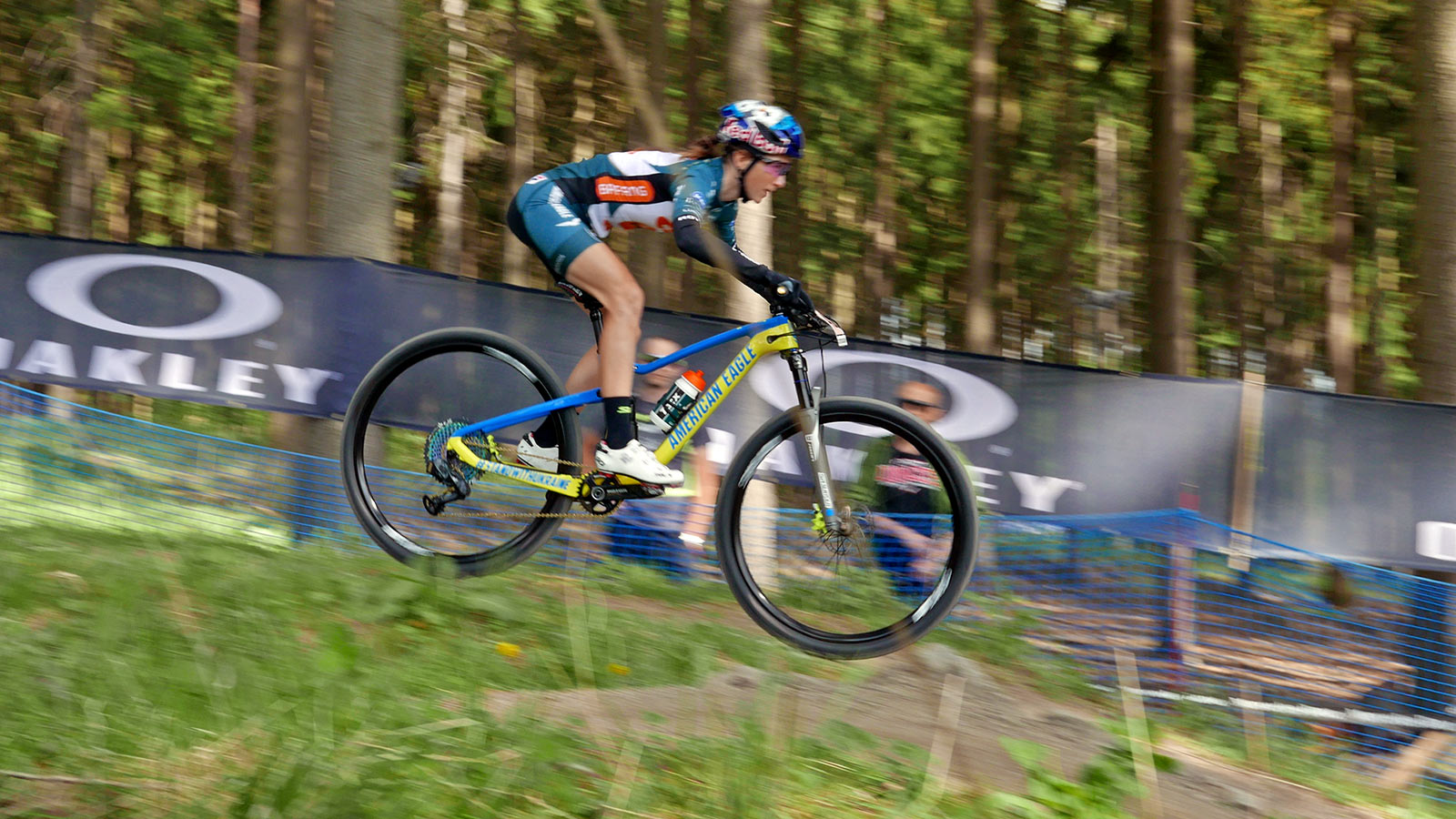 We’ve been following the development of the American Eagle Flow full-suspension bike under the CST racing team led by Bart Brentjens since the 2019 racing season, when the prototype finally got a name and all the details in mid-summer. A few seasons of XC racing later, two of CST PostNL Bafang MTB Racing Team’s top-ranked riders hail from Ukraine, a country currently ravaged by war since the Russian invasion three months ago. 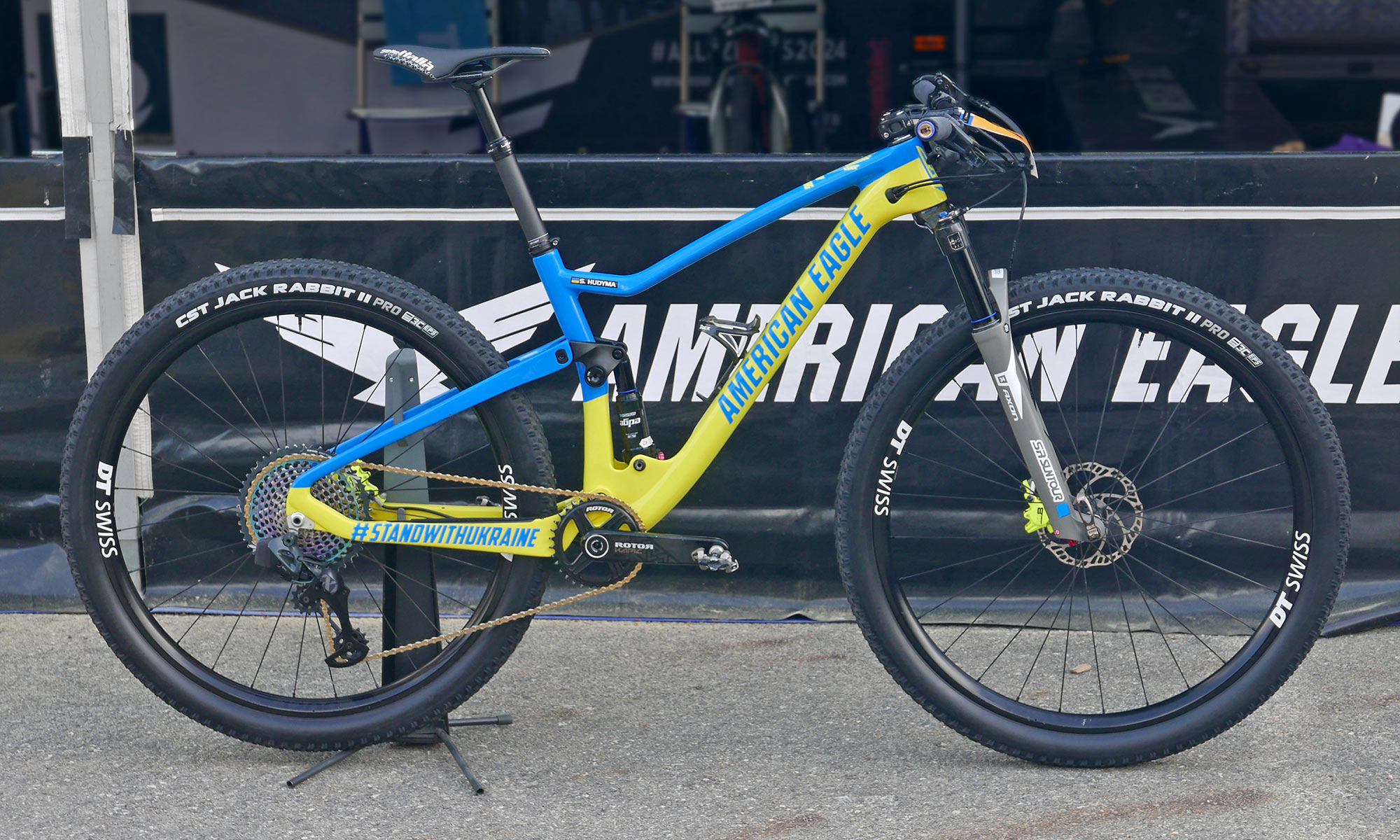 So while Sasha Hudyma and Yana Belomoina stay strong and show courage, the team and sponsors have custom-painted bikes in the colors of the Ukrainian flag for the pair so they can represent Ukraine on the world stage. mountain bike races, and keep the fate of their homeland in the minds of the public. 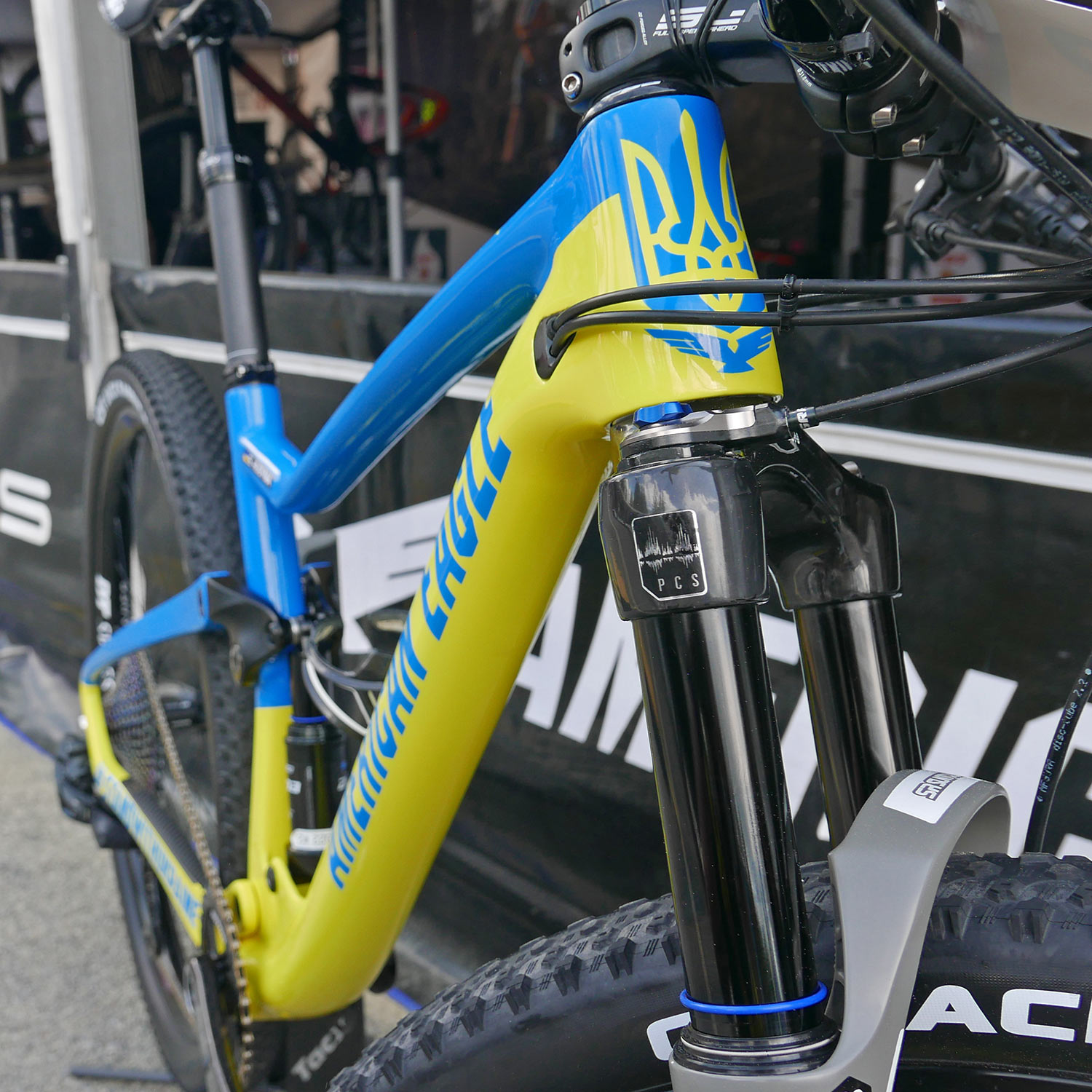 Both riders are on the American Eagle Flow 100mm carbon full-suspension cross-country bike with the same yellow and blue #StandWithUkraine paint job, and almost exactly the same team-build specs. 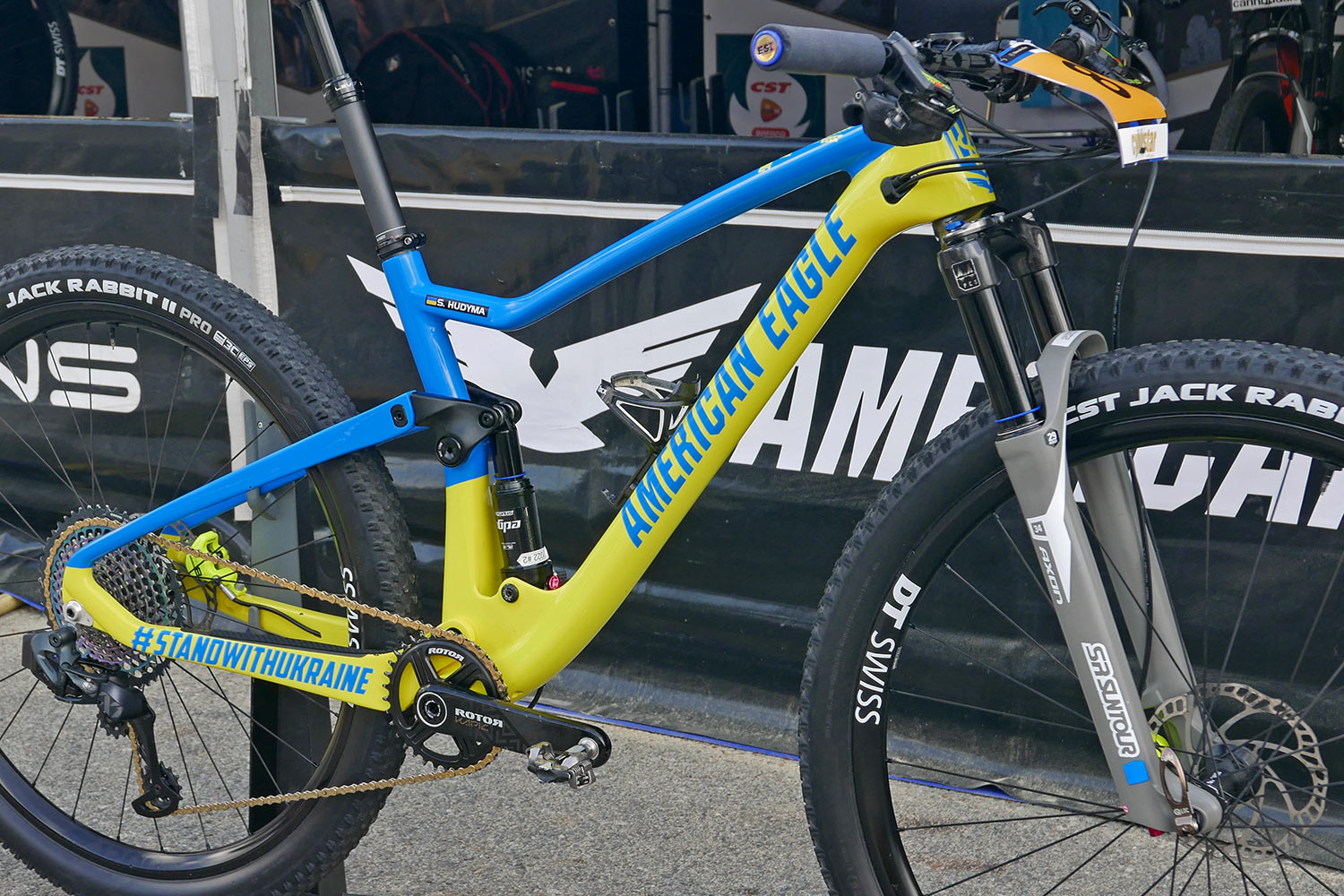 New this year, the team is sponsored by SR Suntour for suspension, and Sasha Hudyma’s bike is fitted with an Axon Werx 34 Boost EQ fork and Edge RL-R rear shock. 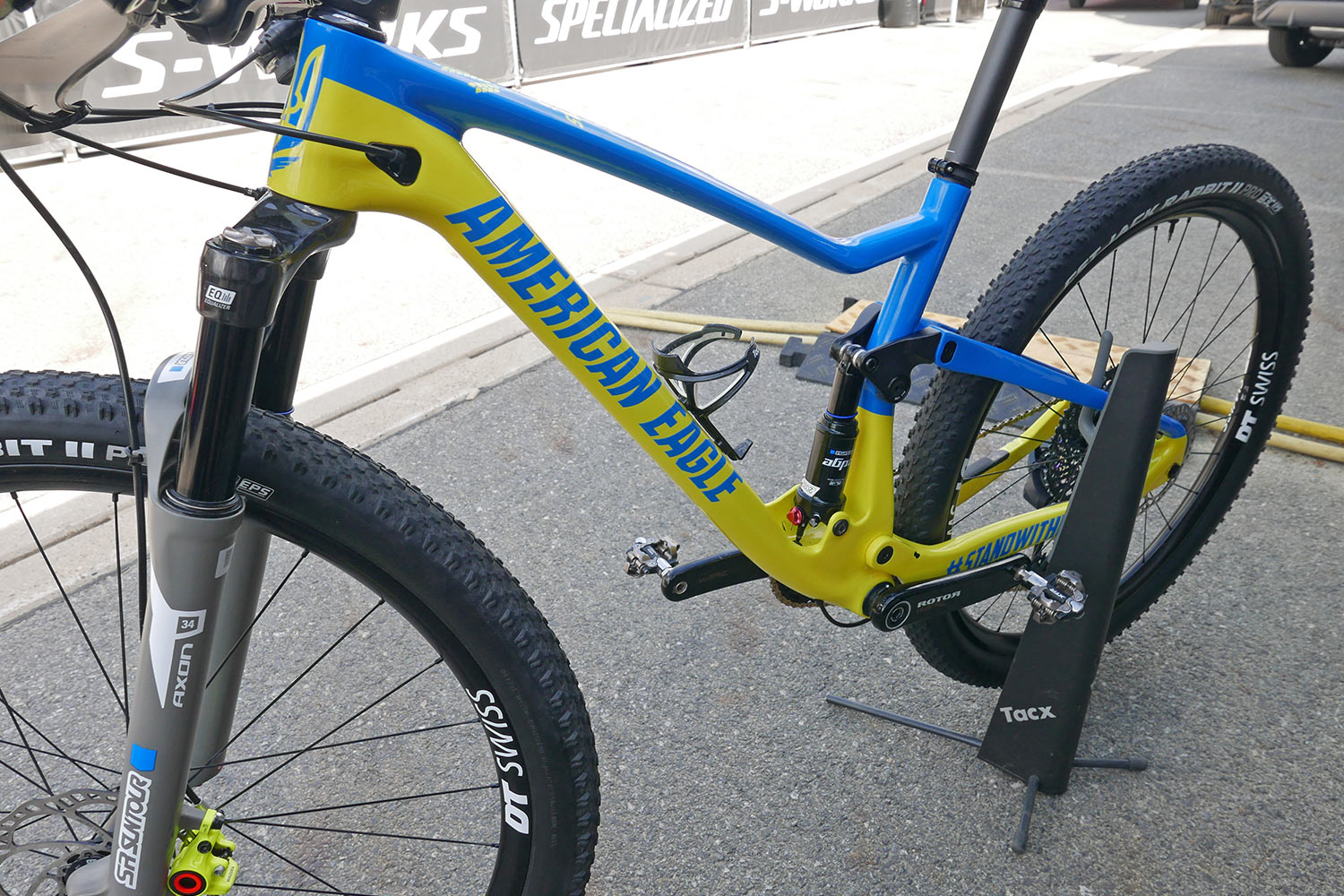 Interestingly, the team opted to use SR Suntour’s slightly heavier and stiffer 34mm stanchion race fork with magnesium legs and carbon crown instead of the larger 32mm stanchion fork. lightweight 100g with carbon sleeves. The reason is twofold – the 34 fork is Boost spaced while the 32 still has a 100mm thru-axle, and the larger fork provides longer travel. The team apparently went with the 110mm medium travel setting to loosen up the geometry on the Flow a bit and smooth out the ever more technical XC courses. 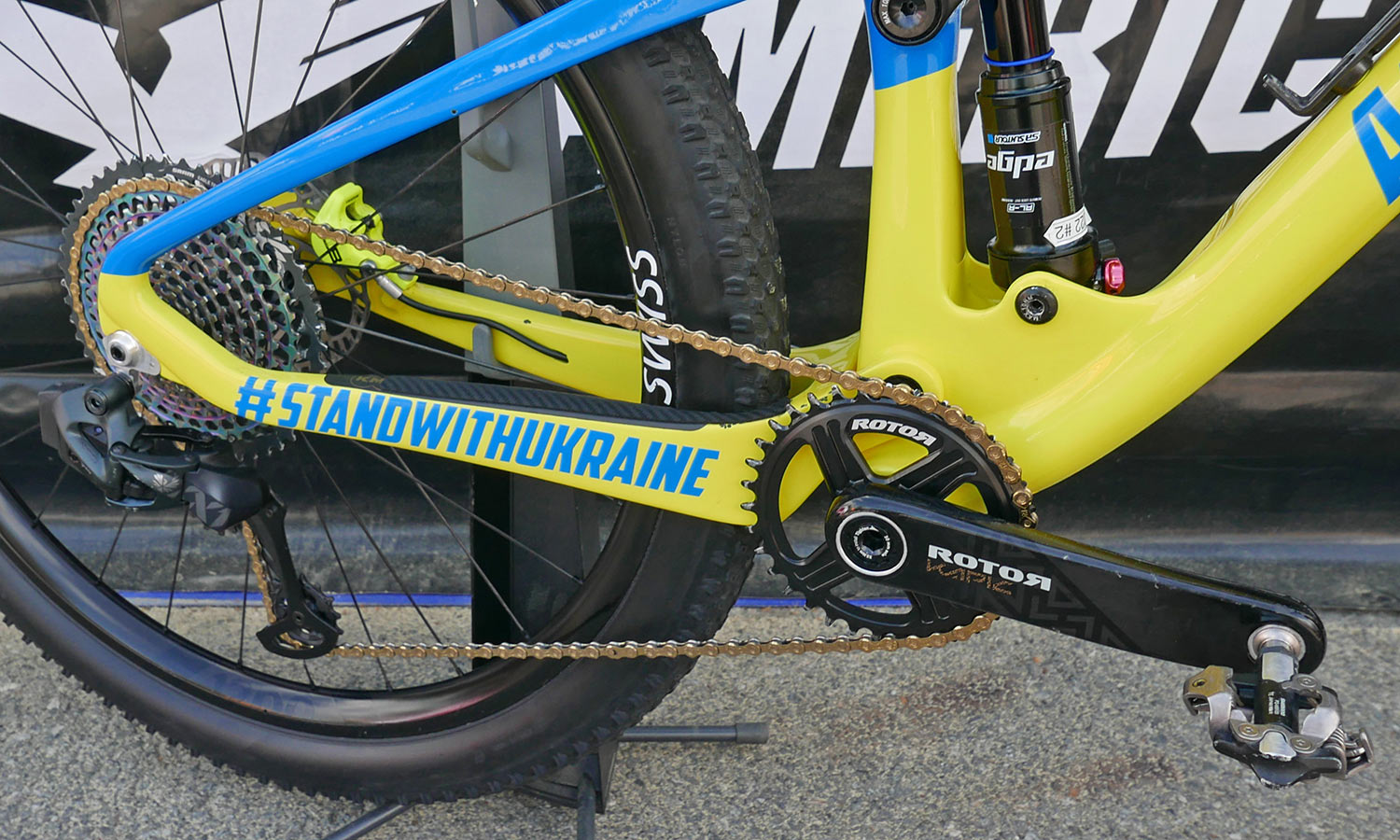 With no direct drivetrain sponsor per se, the team assembled Rotor Kapic Carbon cranks, Rotor direct mount chainring and KMC chains from their sponsors with a SRAM XX1 AXS Eagle rear derailleur and cassette. Plus the Shimano XTR pedals, which are hard to argue with.

Brakes from Magura with the MT8 Raceline in bright yellow and grips from ESI for this Racer’s Edge. 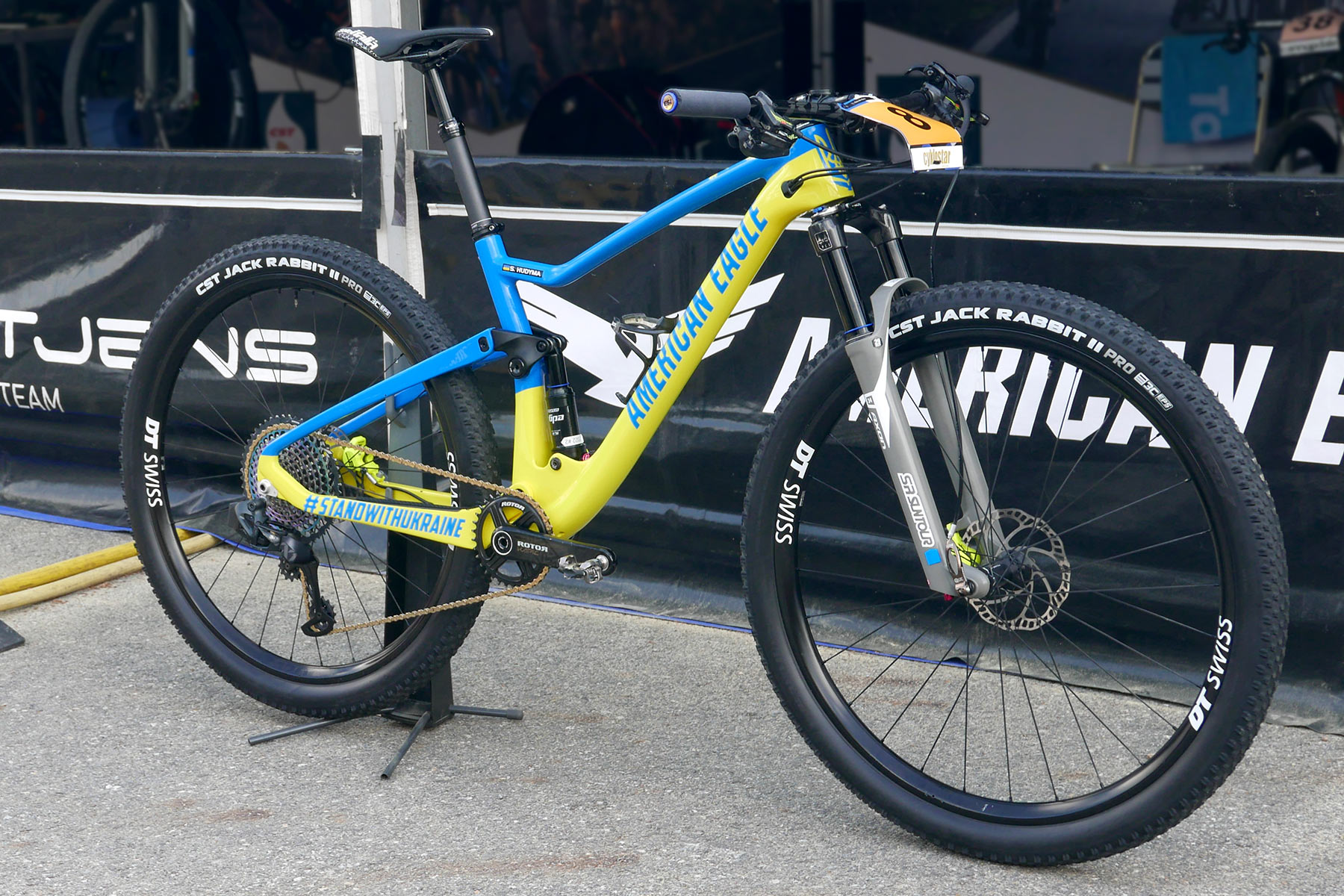 The black-on-black label wheels appear to be branded as XRC 1200, but they don’t share the smoother rounded rim profile of the current 25mm or 30mm XRC 1200 Spline in-house carbon wheels. We have also seen these same wheels on several other pro bikes.

Differences between the bikes of Sasha Hudyma & Yana Belomoina 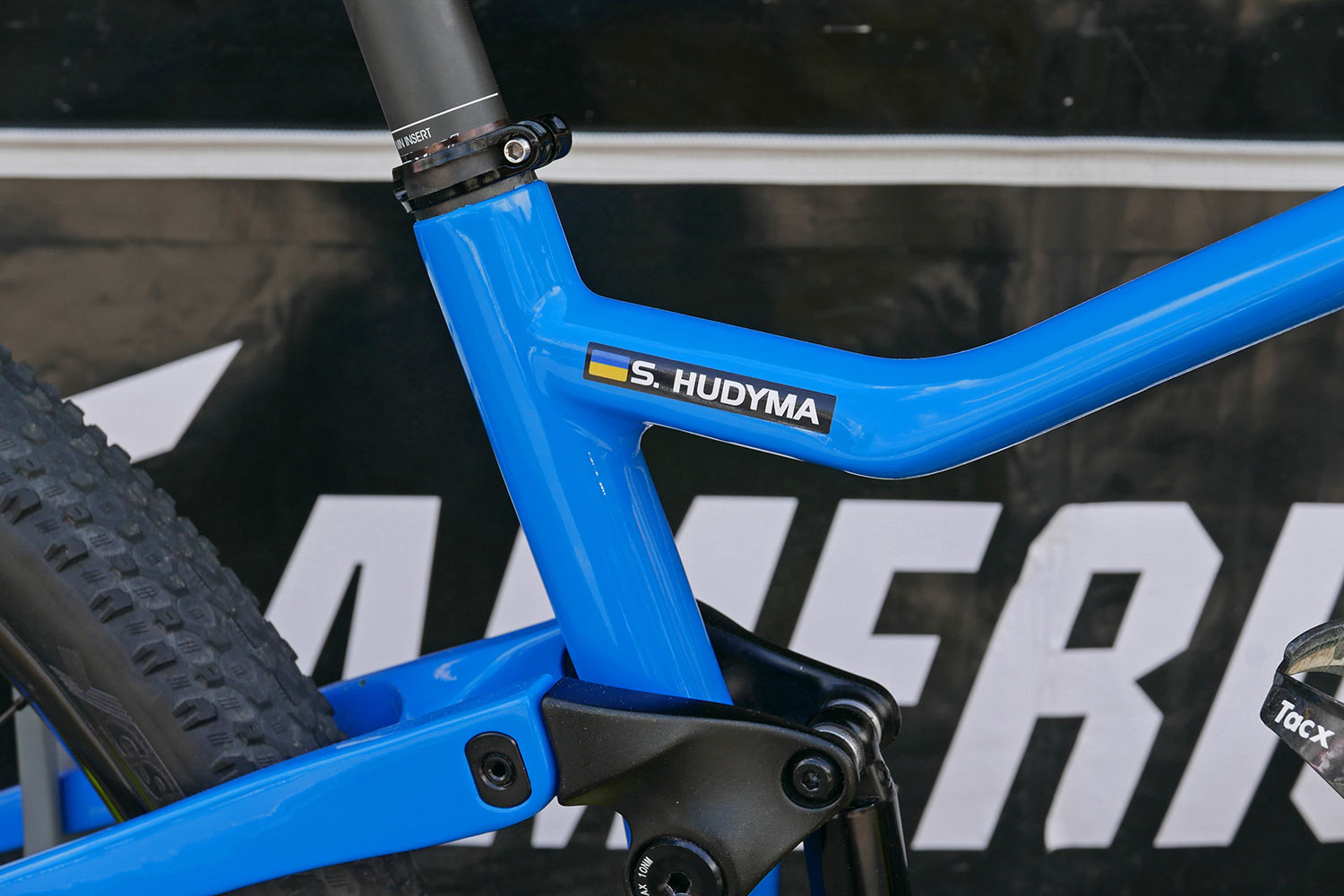 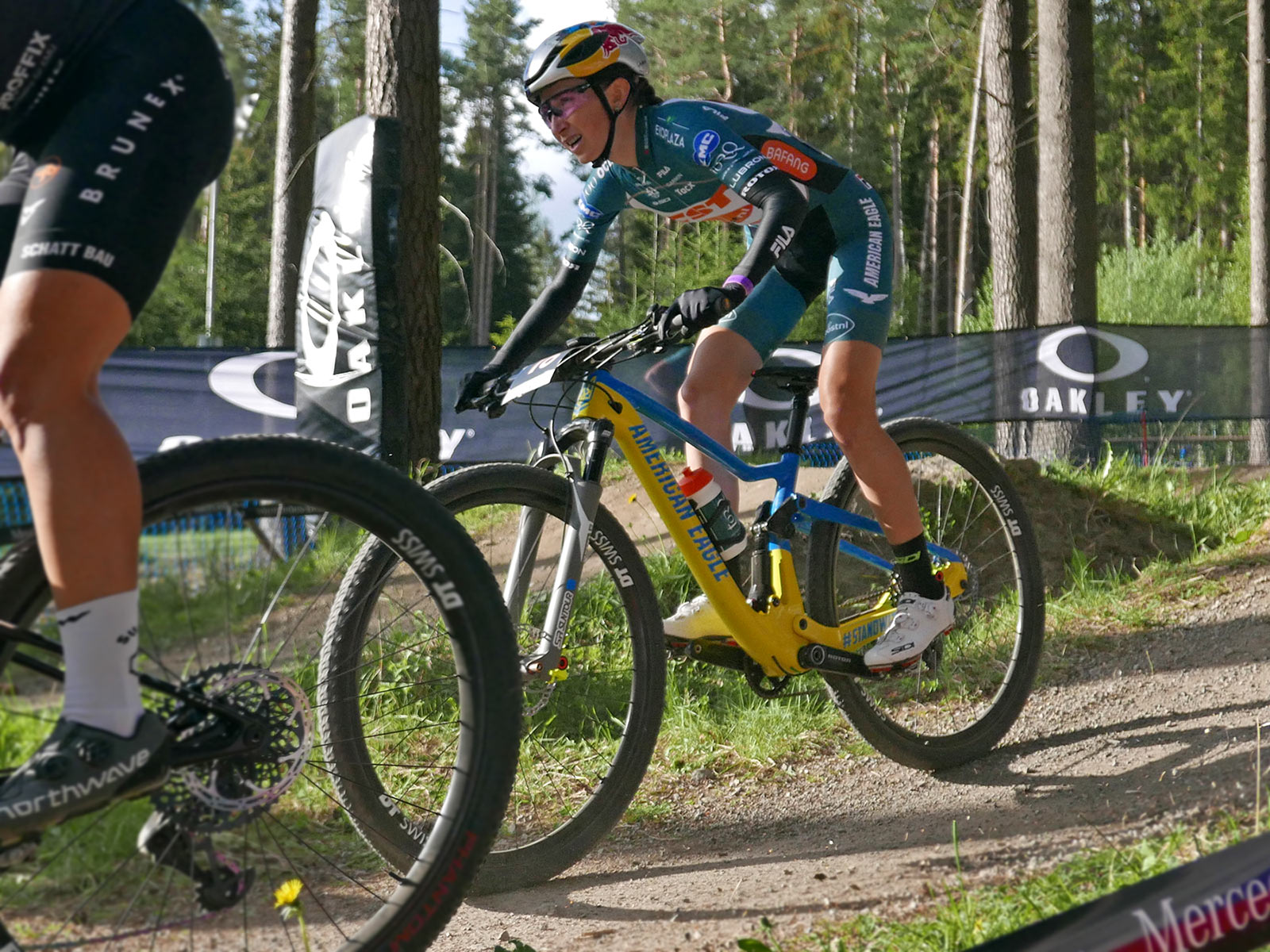 …but we also got plenty of glimpses of Yana Belomoina’s similar setup on the racetrack. 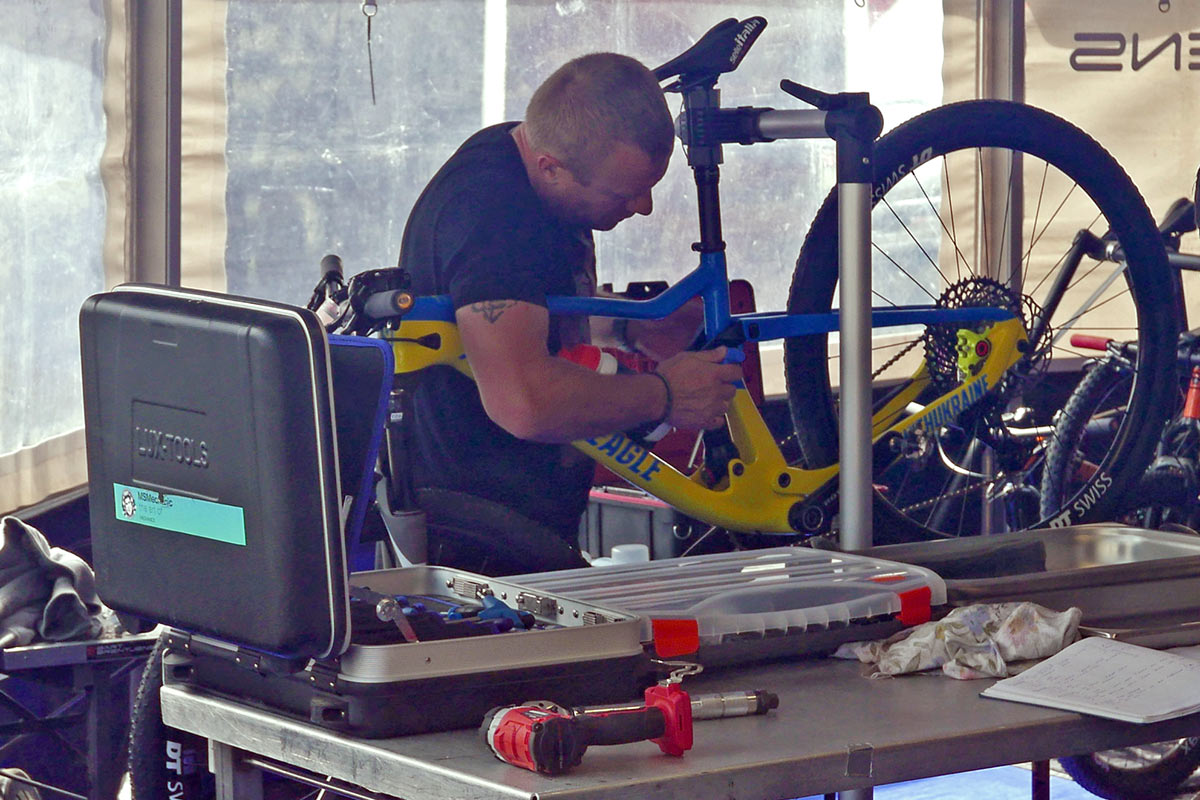 Why was the team less free with Yana Belomoina’s bike? Maybe his mechanic working on installing or setting up his rear suspension could give us a clue? 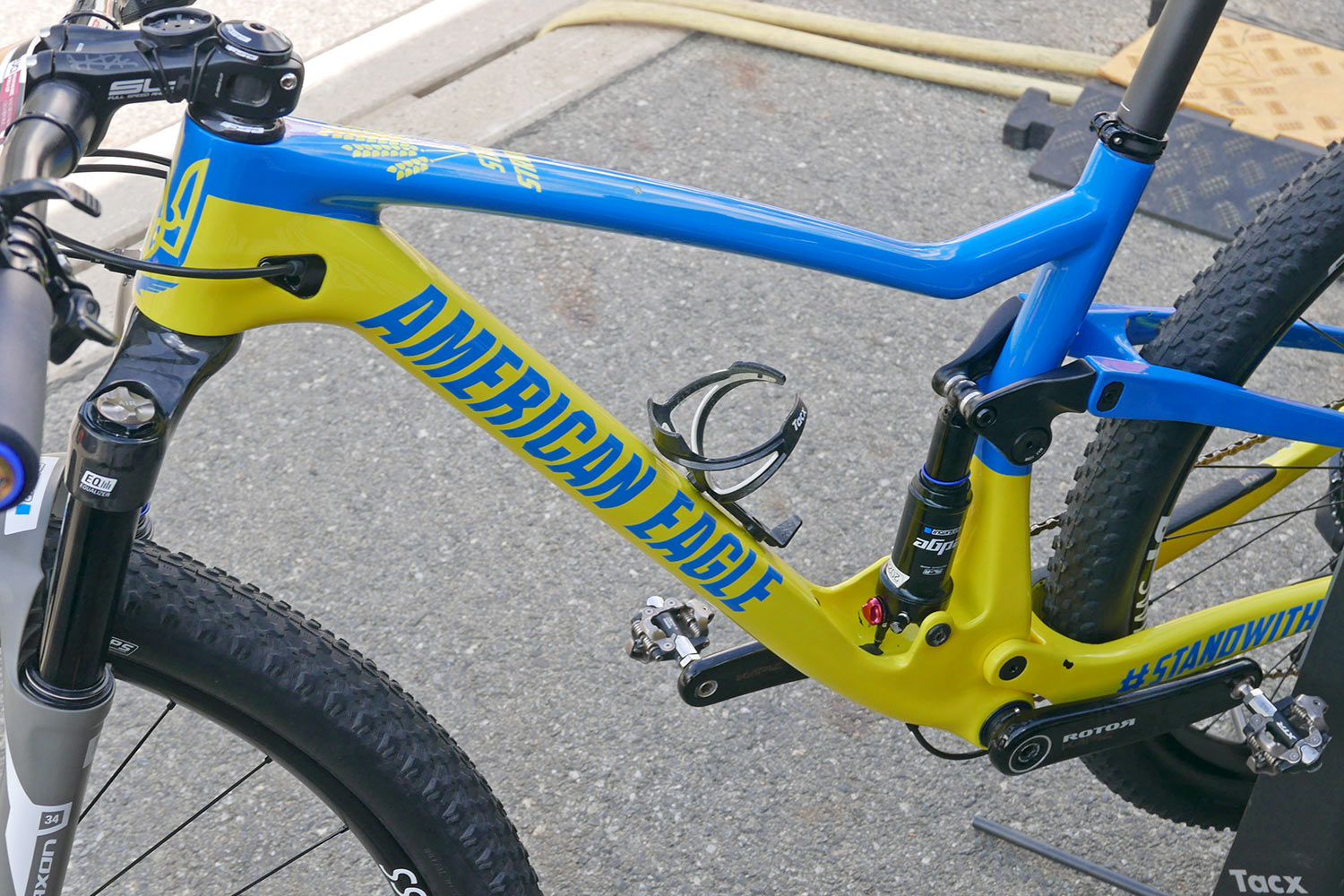 Sasha Hudyma’s bike was fitted with an SR Suntour Edge RLR Trunnion rear shock upside down, straight out of the current SR Suntour catalog and even labeled 2022 #2 on her tuned race bike. But does this #2 also offer insight into whether the team could perform back-to-back suspension tuning tests? 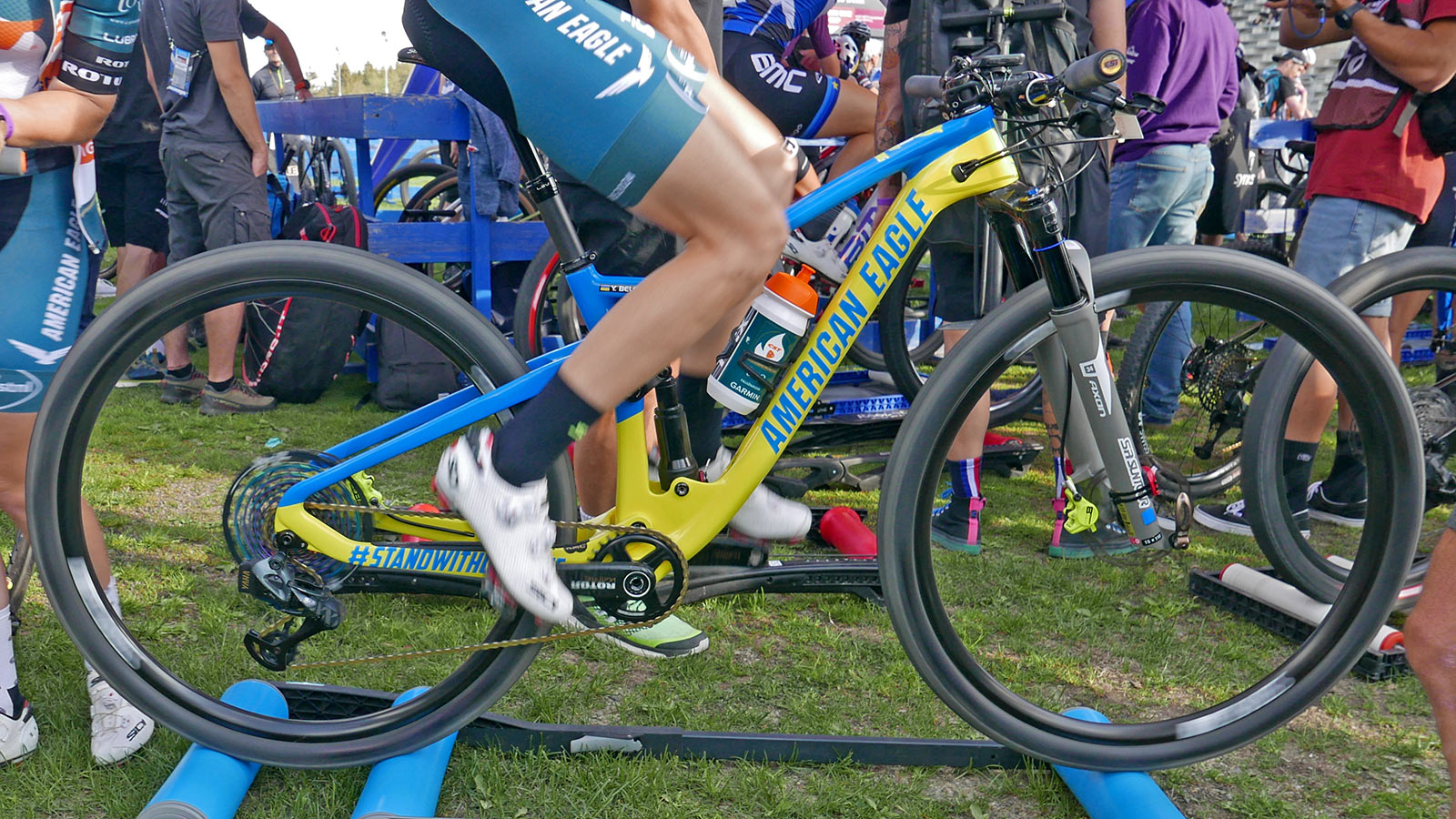 On the other hand, we got to see Yana Belomoina warming up on rollers ahead of the short track race, with a completely unmarked shock.

Without any tags, at first glance it seemed to share a somewhat similar profile to a RockShox Deluxe Ultimate Remote shock, even down to the remote cable lockout control and rebound knob…but overall shape isn’t everything absolutely the same. 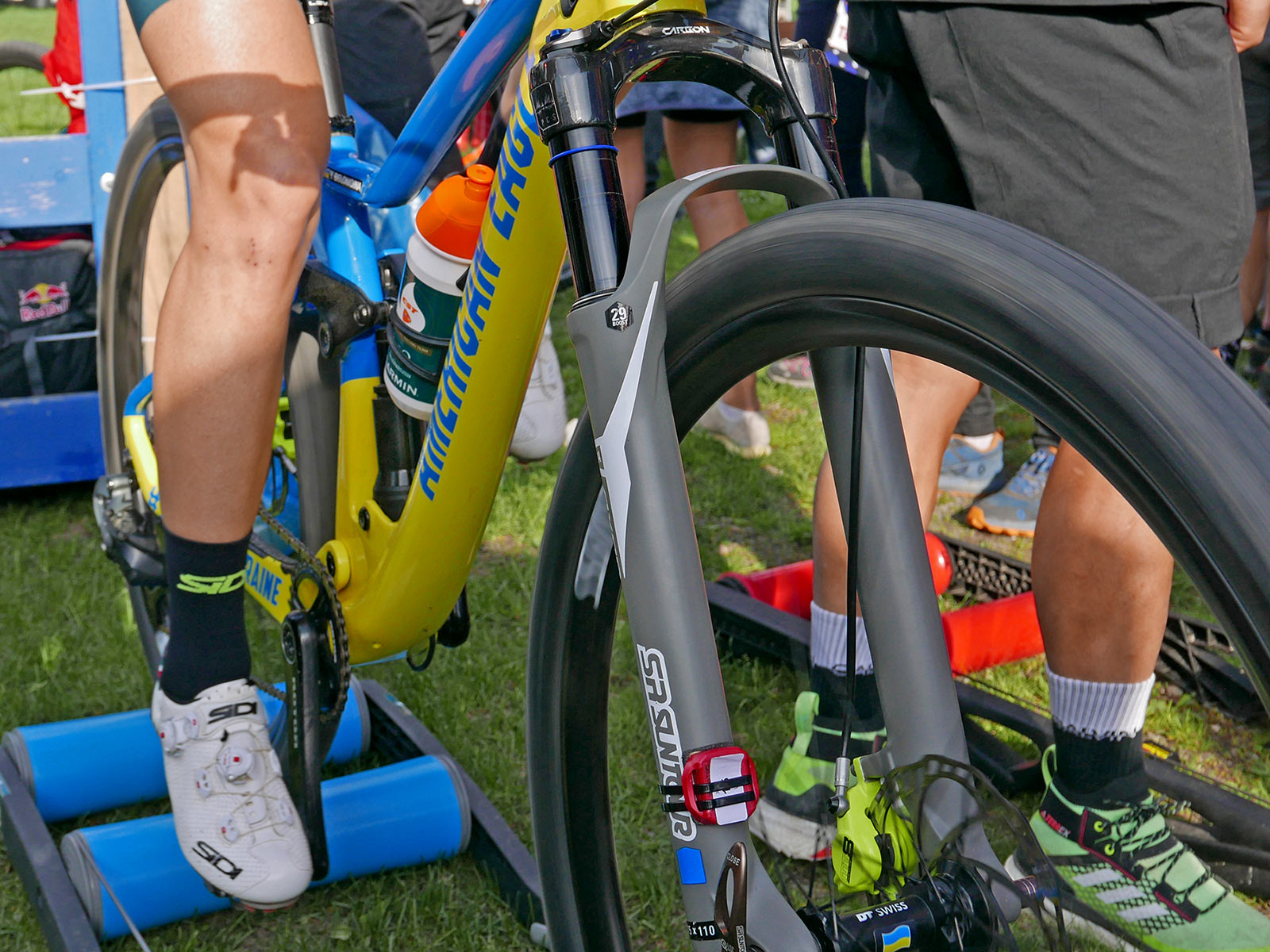 The straight sides of the airbox and lowered end of the main seal share a shape much closer to SR Suntour’s own XC Edge Plus and Raidon series of shocks. So, I would step out on a limb and say that Yana Belomoina is testing a prototype lighter next-generation SR Suntour Edge XC shock. 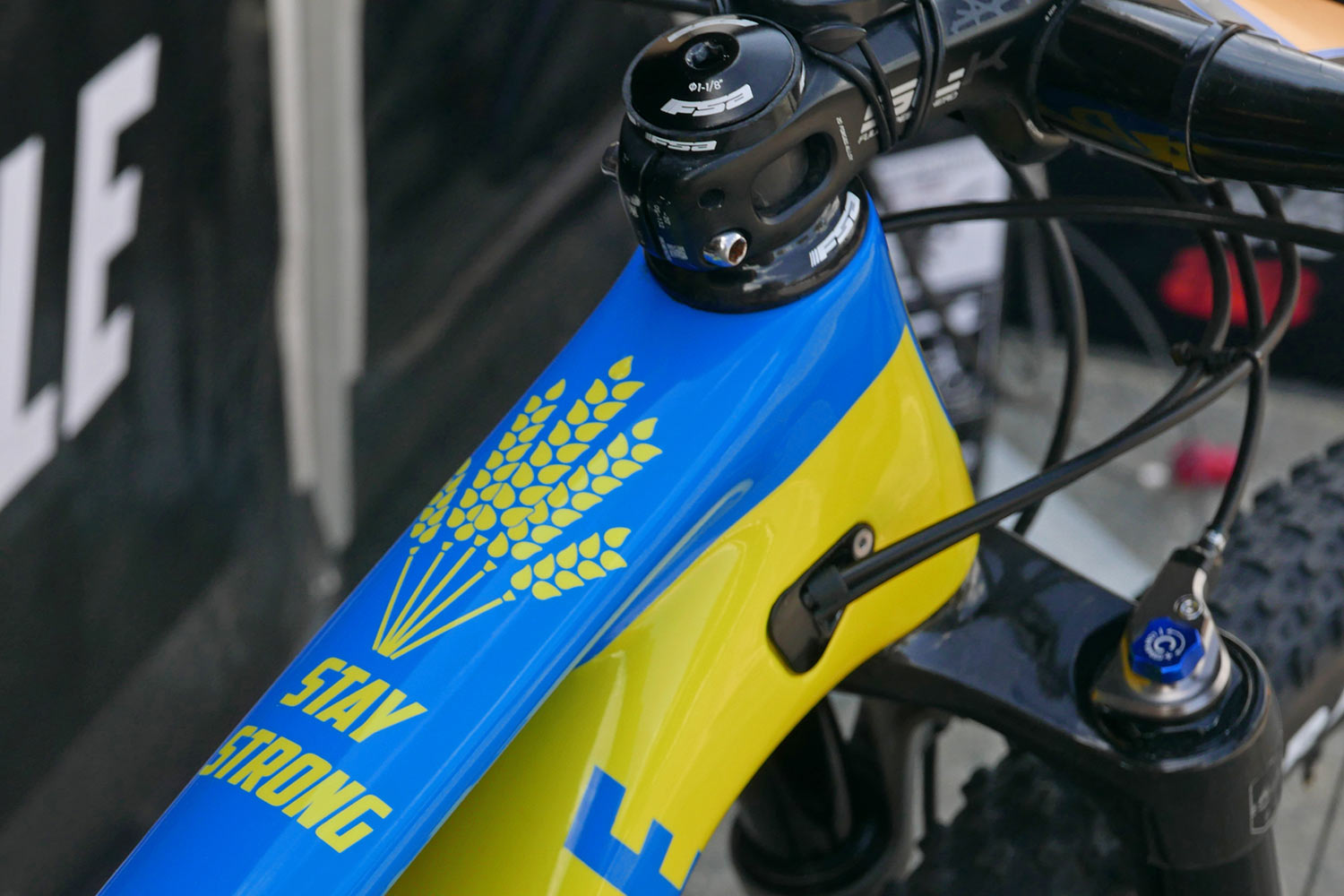